The beginnings of nadia

Nadia Khodossievich was born on 23 October 1904 in a village near Vilnius. Nadia spent her childhood in Zembino, Belarus. The young peasant girl is a passionate drawer. To fulfill this passion, she quickly realized that she could only express herself by emancipating herself from her native land. 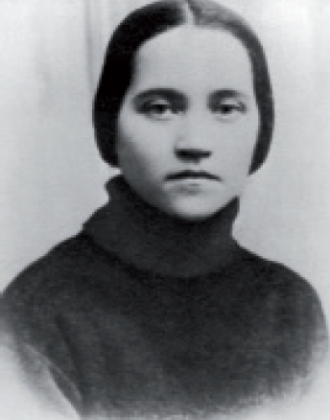 Imagine a peasant woman from Cantal who would be a student of Marcel Duchamp!

At the age of 15, in Smolensk, she attended Wladyslaw Strzeminski’s classes. It was there that she met the person who would influence all her work, the founder of suprematism: Kasimir Malevitch.

From this period dates her first painting, “Presse-papiers”, a cubist work that testifies to a remarkable mastery of shapes and the harmony of colors. 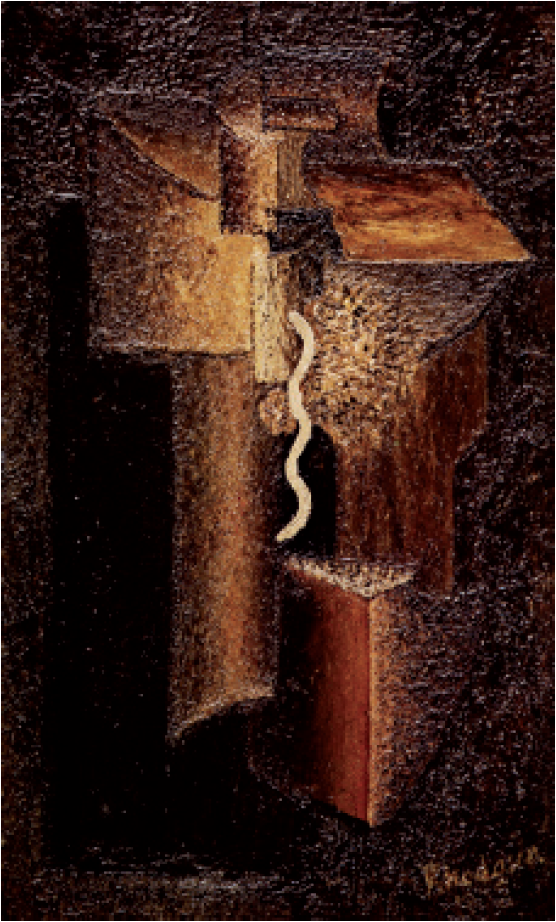 The discovery of Fernand

The young girl is gifted and she skilfully reproduces some sketches entitled Mouvement de formes ou Triangle dans l’espace already imbued with what is then the epitome of abstract art. But young Nadia has only one dream: Paris, the world’s capital of arts and culture. Particularly since, while reading a French magazine, “L’Esprit nouveau”, she discovered the works of a certain Fernand Léger. It was a revelation and she decided to go and meet him. Her journey to the West will pass through Poland where she will stay for four years. She joined the Warsaw Fine Arts Academy and married the artist Stanislas Grabowski. The couple of artists arrived in Paris in November 1925.

The conquest of Paris

In December 1925, after having travelled all over Europe, Nadia decided to open the door to the Modern Academy where Fernand Léger was a tutor. It is the painter Amédée Ozenfant who welcomes the young woman. The meeting with Léger took place three years later.

The acknowledgement of a talent

Nadia was part of the generation of artists from the East who, in the 1920s and 1930s, in France, profoundly disrupted the great artistic references. From 1925 to 1930, the various influences on Nadia’s work were perceptible. Her paintings take the abstract to a new level, whether in a cubist or geometric-purist style close to Ozenfant or inspired by the biomorphic forms of Arp. All her work is imbued with what will be at that time the most fantastic of artists’ studios: the Paris of the inter-war period.

The young artist has found her way. In 1929, her paintings were in common with the paintings of the greatest painters such as Léger, Kandinsky or Mondrian. Some artists she met when she was only a modest student, became her closest friends, such as Marcoussis, Picasso, Chagall, Le Corbusier and the whole gang of Aragon. Nadia is part of the series. Based in a gallery, she created with her own resources the Franco-Polish magazine “L’art contemporain”, in which Mondrian, Léger, Arp, Ozenfant and Polish artists from the a.r. (revolutionary artists) group collaborate. 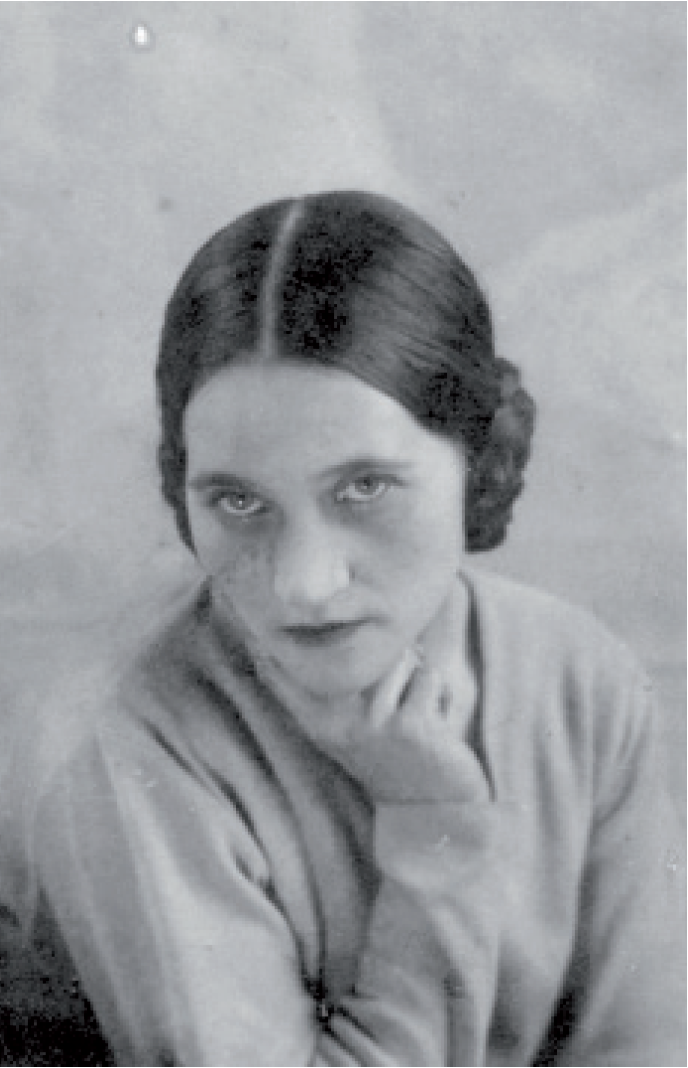 Malevich has put an end to the long and admirable route of pictorial art. I fell into a pit. I thought I was dying. I only came out thanks to you (Fernand Léger). Your faith in the future of painting is like a rope launched to save me. But where should I go now? Where is the path to future art? 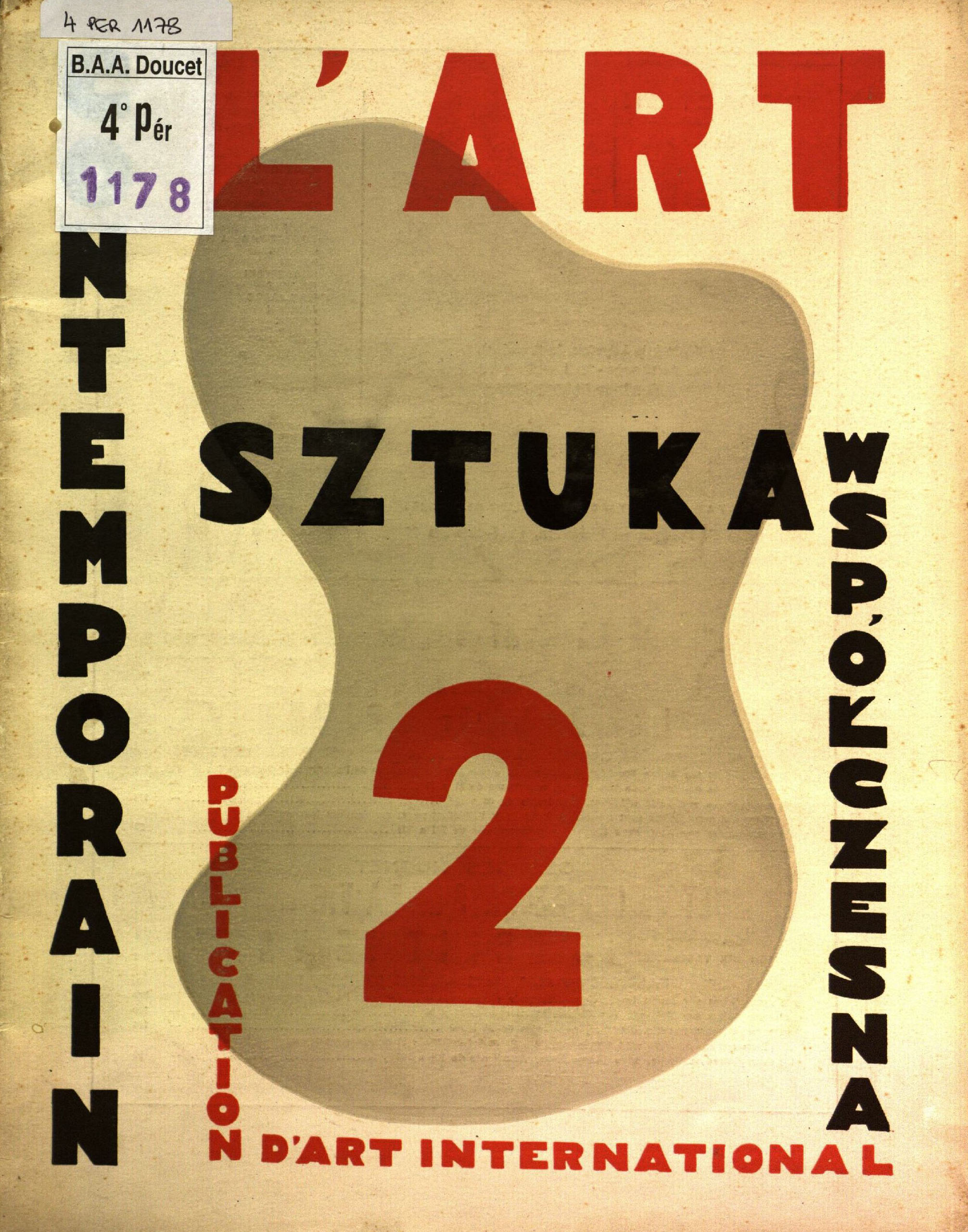 Cover of the magazine L’art contemporain
(1929), created by Nadia, kept at the Library of the “Institut national d’histoire de l’art”, Jacques Doucet collections.

The meeting with Léger

On a more personal level, Nadia’s destiny will change. Mother of a small Wanda, born in Paris in 1927, Nadia left her husband. To survive, the sale of a few paintings is not enough. She’s a maid. It was also at this time that she left Ozenfant to become Fernand Léger’s student. In a dark attic in “rue Valette” where the young woman lives, Fernand (47 years old) and Nadia (24 years old) start a relationship. They would marry thirty years later.

At the beginning of the 1930s, although they were both separately married, Fernand and Nadia formed a couple. In 1933, Fernand Léger entrusted her with his studio, which has an international reputation. She was the assistant and then the manager until its closure in 1951. Nadia will be the soul of this extraordinary modern laboratory for nearly twenty years. 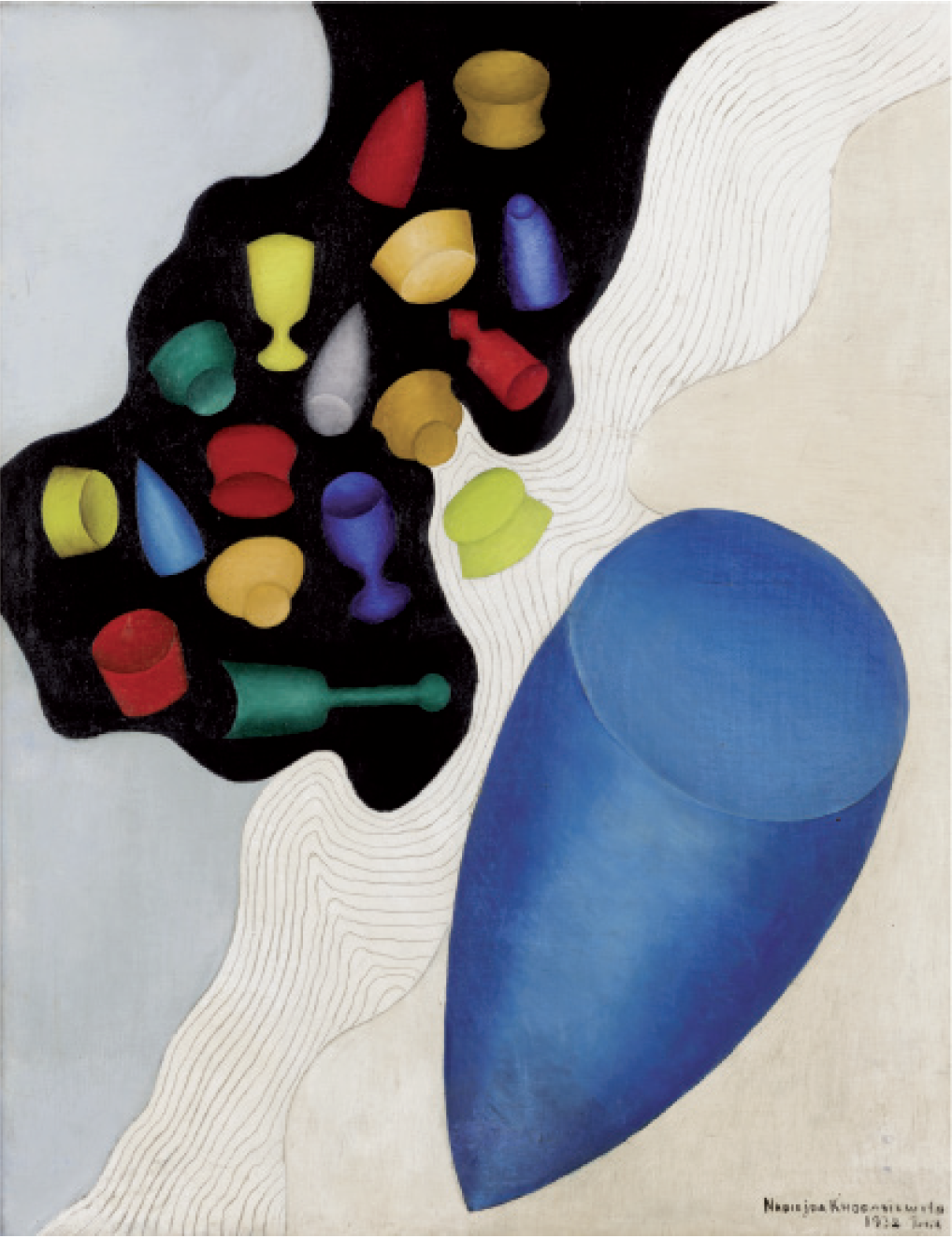 Fernand Léger, who has become one of the most famous French painters in the world, believes in her talent and holds her in high esteem. In Paris, in the absence of the Master, she gives the drawing lessons. On this subject, some of Robert Doisneau’s pictures are eloquent: in a grey coat, Nadia gives advice and encouragement to young students, including a certain Nicolas de Staël. She devotes herself ardently to her work, while continuing to support Léger in his great collective work.

Nadia will devote her entire life to Fernand Léger’s work. But, in the shadow of the Master, instead of being silenced, the artist releases her art. Nadia can not only transmit but also express in her personal work what Malevich, Ozenfant and Léger have taught her. Now she masters the “clash of contrasts” and forges her own creative method. The solid colors on a background of anchors, the treatment of the face and hands reveal a brand new emancipated approach to suprematism, cubism and purism. 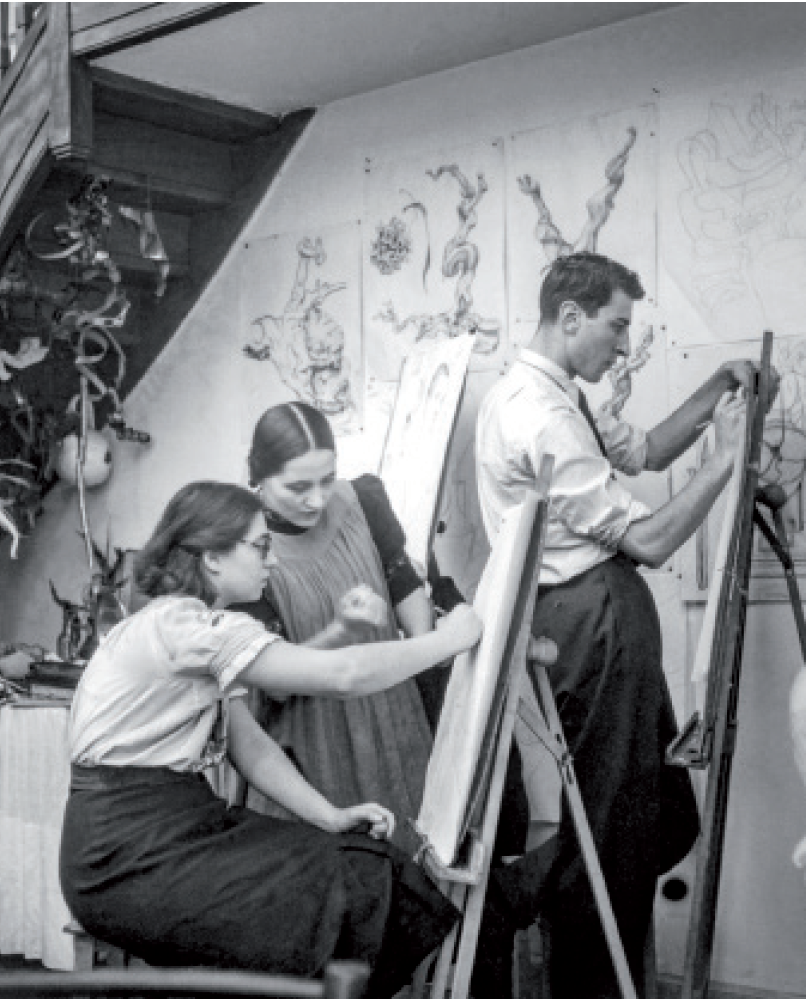 In the service of Popular Front

In May 1936, Nadia, Fernand and the students of L’Atelier Léger marched through “Place de la Nation” to celebrate the victory of the Front populaire. Nadia has never made a secret of her commitment. In 1933, she took her card from the Communist Party while Fernand defined himself as a humanist de gauche. With André-Malraux, Louis Aragon, Paul Eluard, André Masson…, he is one of those who want to reconcile art and the people. Nadia, with her paint brush in hand, mobilizes the workshop to create murals and wall panels in collaboration with Charlotte Perriand. But at the end of the 1930s, the excitement was brief. The storm is rumbling and “popular art accessible to all” is giving way to the sounds of boots. 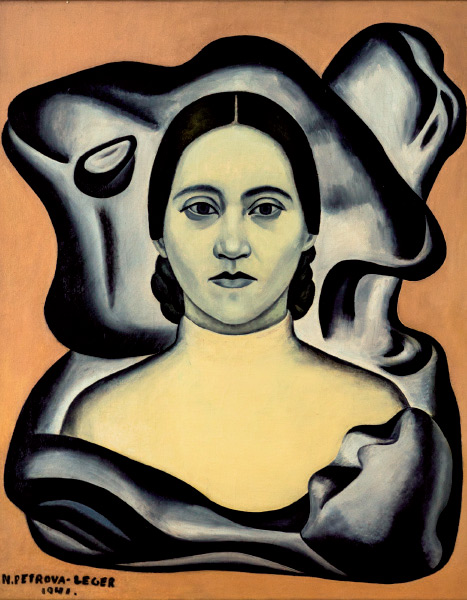 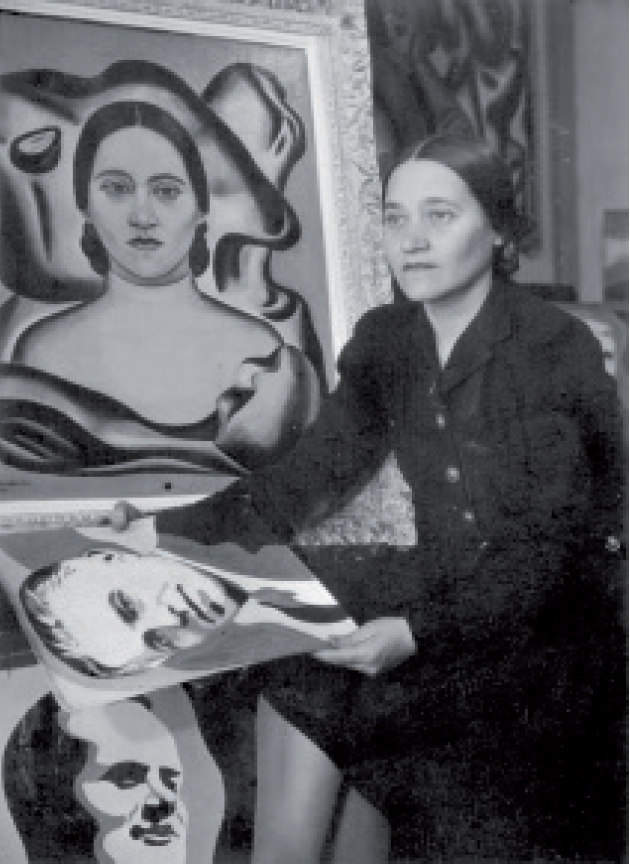 In 1940, Fernand Léger took refuge in the United States and stayed there for four years. Nadia decides to stay in France with her daughter. She went into hiding and into the Resistance. In platinum blonde shade, with false papers, she will be a liaison agent under the name of Georgette Paineau, affiliated to an FTP-MOI network. Between interrogations and searching’’, she barely escapes and lives to the rhythm of hiding places and tailings. Throughout the Occupation, in the deserted and icy studio of Montrouge, she would never stop painting. Her works in bright colors are a challenge to death. She designs a series of self-portraits and portraits of Fernand Léger.
With France liberated, Nadia reopened the studio and prepared for Fernand Léger’s return. 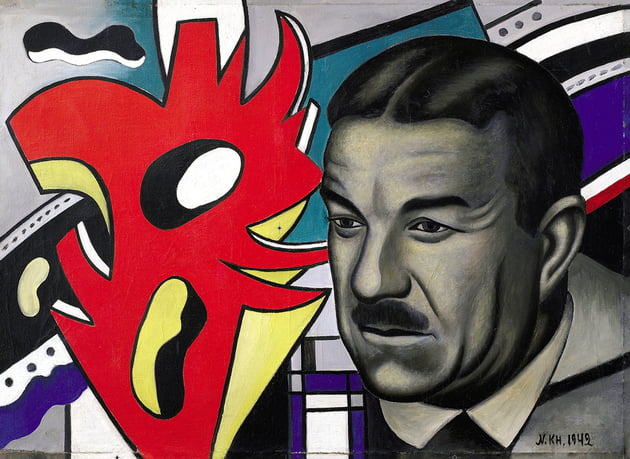 The art of propaganda 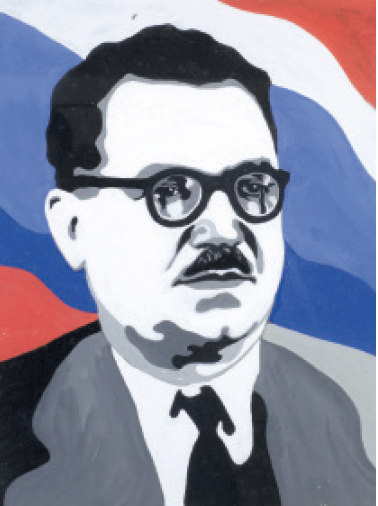 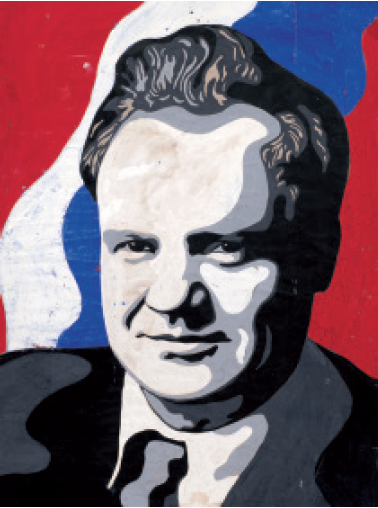 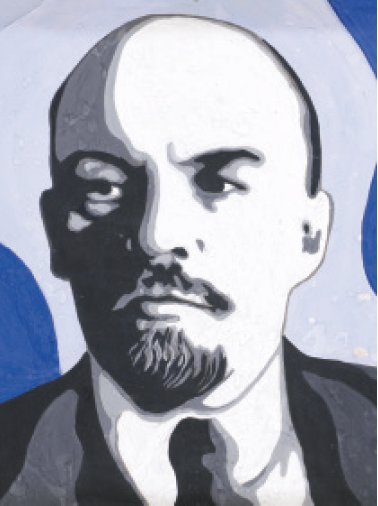 The numerous portraits made by Nadia decorate the 10th Congress of the French Communist Party in June 1945.

Without being her close friend, Picasso has always supported Nadia, activist or artist. Their first meeting took place in 1945. Nadia organizes an auction for the benefit of Soviet prisoners of war. With audacity, she went to Picasso’s house: “Choose what you want from my paintings. And take as many as you want!” Picasso says to her. Nadia can’t believe it. She takes three paintings. In this post-war period, no solicited painter can refuse what Picasso has accepted. Thanks to Picasso, Nadia collected 150 paintings (Braque, Matisse…) sold for the benefit of the Red Army. It is a success. From this first meeting comes a complicity, even a friendship. 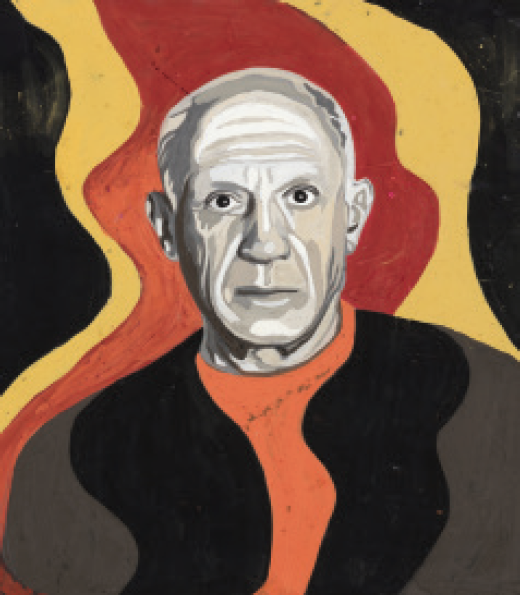 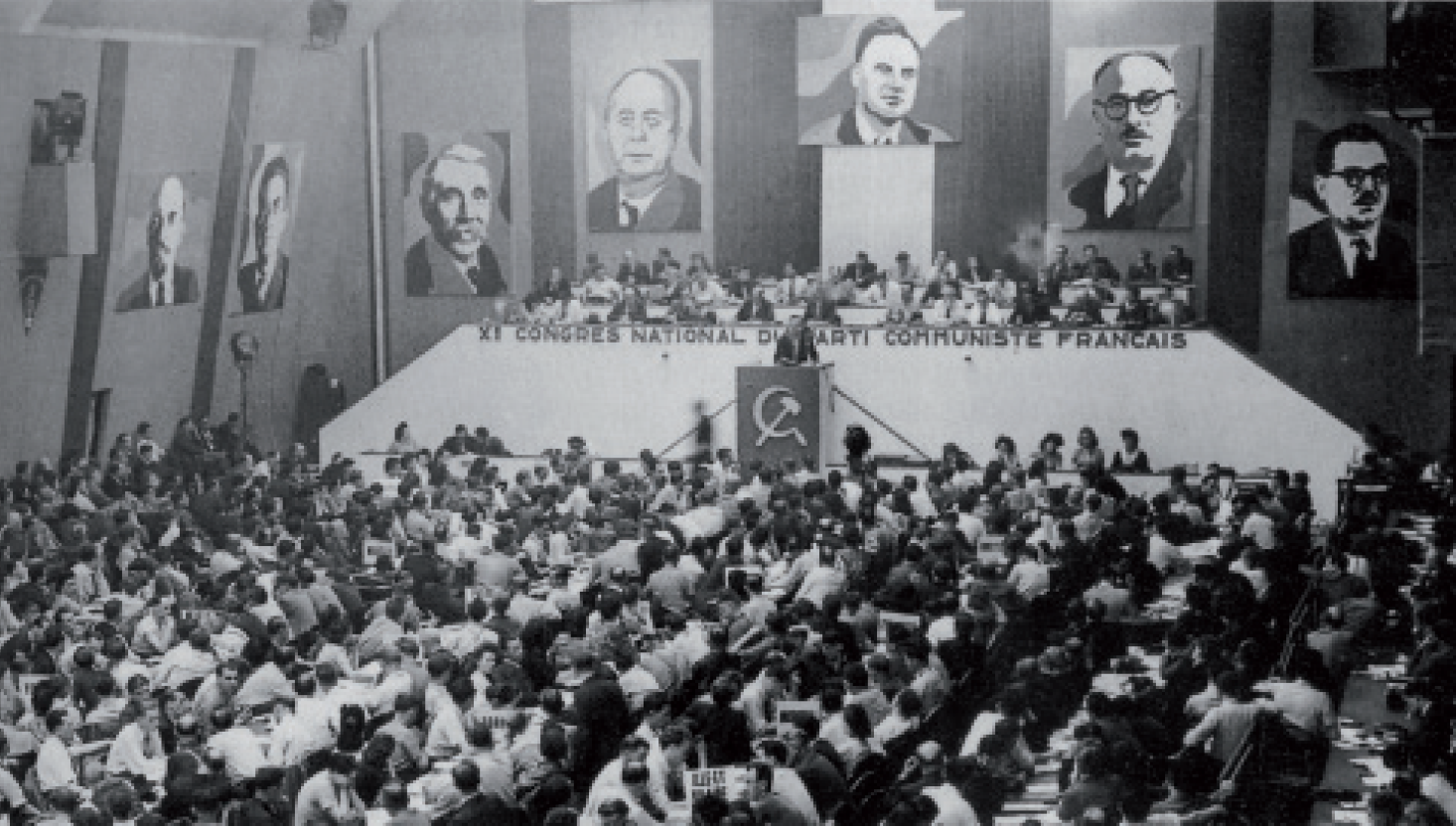 A few months later, in the absence of Fernand Léger still in the United States, Nadia went back to Picasso’s studio on rue des Grands-Augustins. This time, she is asking for his opinion. The PC entrusted Nadia with the realization of the portraits and monumental sets of his great meetings. Faced with the importance of the mission, Nadia submitted about twenty gouache portraits to Picasso. Verdict: “You attract the attention with an intelligible image, you force it to perceive an unusual expressive form”. With Picasso’s backing, Nadia will make dozens of monumental portraits of Thorez, Stalin or Lenin that will adorn all the post-war high masses of the PCF. More than 70 years later, her iconic portraits remain extraordinarily modern in a style that may have inspired Obey and his famous two-color portrait of Obama: Hope. 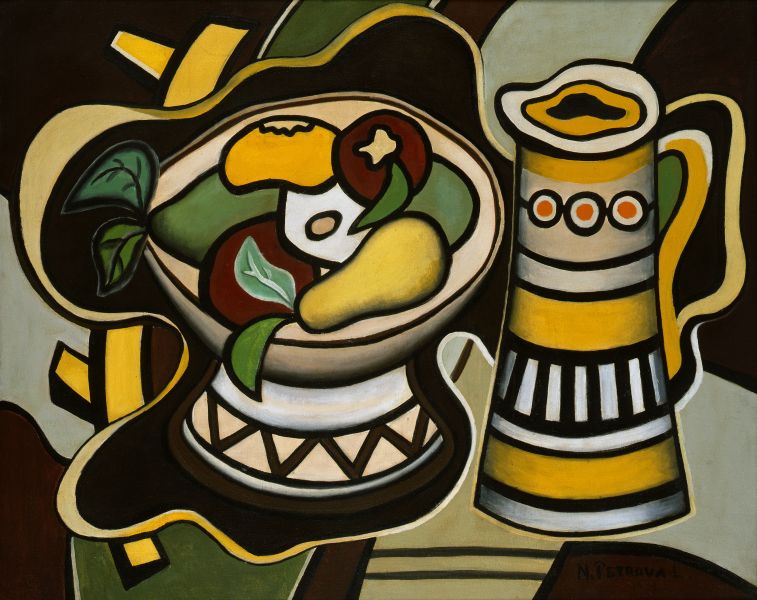 The marriage with Léger

A major player in the art scene since the 1930s, Nadia is rarely mentioned in the press at the time, and historians today continue to misjudge her role. Nadia is confined to her status as facilitator of the L’Atelier Léger. Her proximity to Fernand Léger is at the expense of her own reputation. Yet she never stopped painting. In February 1952, Nadia Khodossievitch married Fernand Léger, formalizing a relationship that began in 1927. 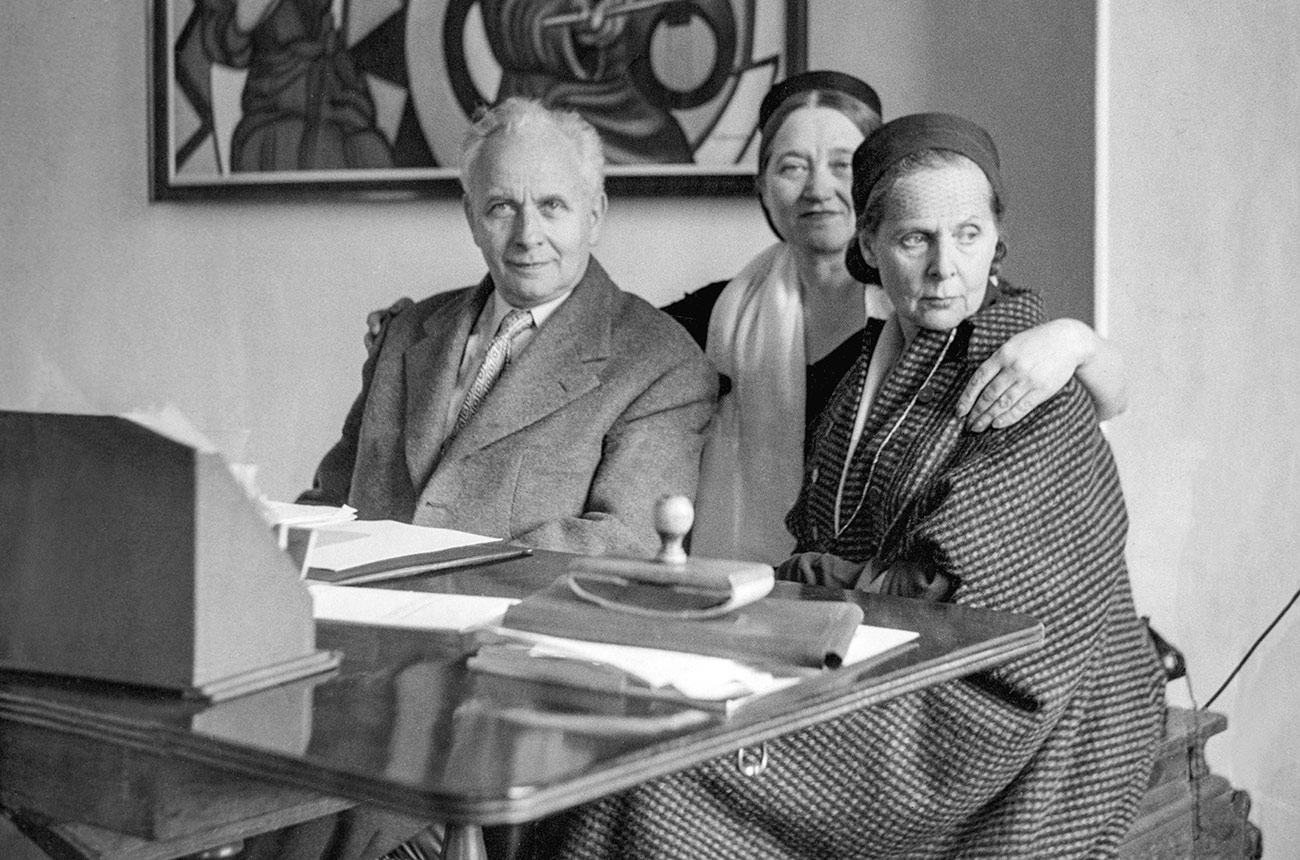 By becoming Mrs. Léger, Nadia will emancipate herself. In November 1953, she exhibited 75 new works at the Bernheim-Jeune Gallery. Louis Aragon praised the paintings: “We can debate on them, we must recognize in Nadia Petrova-Léger’s work a rather singular audacity, a decision that has earned her esteem.”

Although the catalogue of the Bernheim-Jeune exhibition only reproduces four paintings, almost all the works exhibited there have been found. Les Mineurs, inspired by Stakhanov’s exploits. By its format and the quiet power that emanates from it, the painting could be reminiscent of a work by Fernand Léger.

In the 1950s, she “adapted” and reappropriated socialist realism in paintings such as Les Mineurs or Les Constructeurs, with large formats in solid colors, in the style of Fernand Léger.

An imposing painting, entitled La Paix, inspired Fernand Leger to comment: “There is a natural joy, a physical health that I like”. As for the Tajik Musicians, it is this painting that Louis Aragon, the friend of the greatest painters, chose to display it in his office. 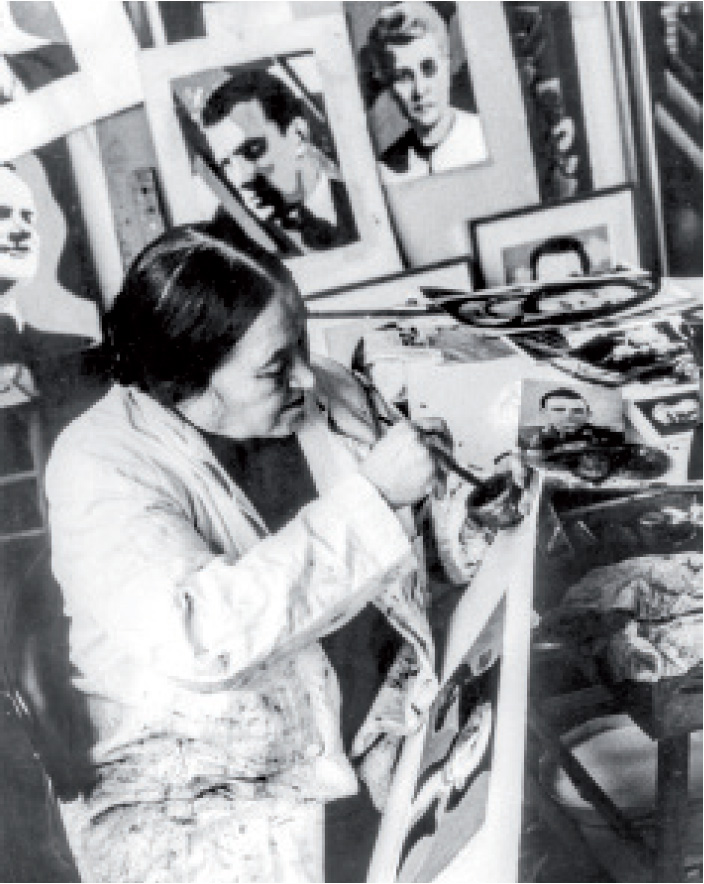 The return to Suprematism

Three years after his marriage with Nadia, Fernand Léger died on August 17, 1955. The painter’s sole heiress, she dedicated her immense fortune to the memory of Léger. For more than a decade, Nadia devoted herself exclusively to the construction of the Fernand Léger de Biot Museum, donated to the State in 1967, then to the Ferme-Musée de Lisores, inaugurated in 1970. Nadia Léger embarks on a new adventure: the return to suprematism. 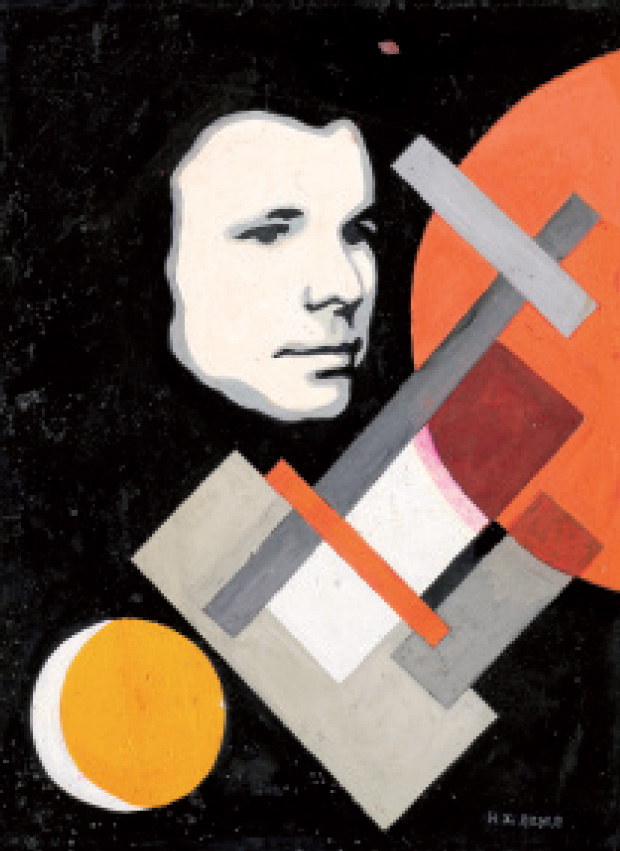 In 1961, Gagarin’s achievement triggered a cosmic shock in Nadia. She sees it as the fulfillment of a prophecy. In a Sputnik ship, Gagarin is the first man to fly into space and make an orbit around the Earth. All these forms of rockets, capsules, all these lines of cosmic path are they not the spatial concretization of the works of his first master Malevich?

Dead in mission, the numerous cosmonauts sacrificed are the knights of the sky whom she sublimates as martyrs of the cosmos. Under Nadia’s painting brush, on a background of squares, profiled triangles, or circles, the faces of the cosmonauts are sanctified with a Suprematism halo. Produced between 1965 and 1972, her supremacy works were then misunderstood, even criticized by her colleagues. Today, Nadia Léger’s “forms in space” are seen as the links in an artistic journey that spanned the 20th century. 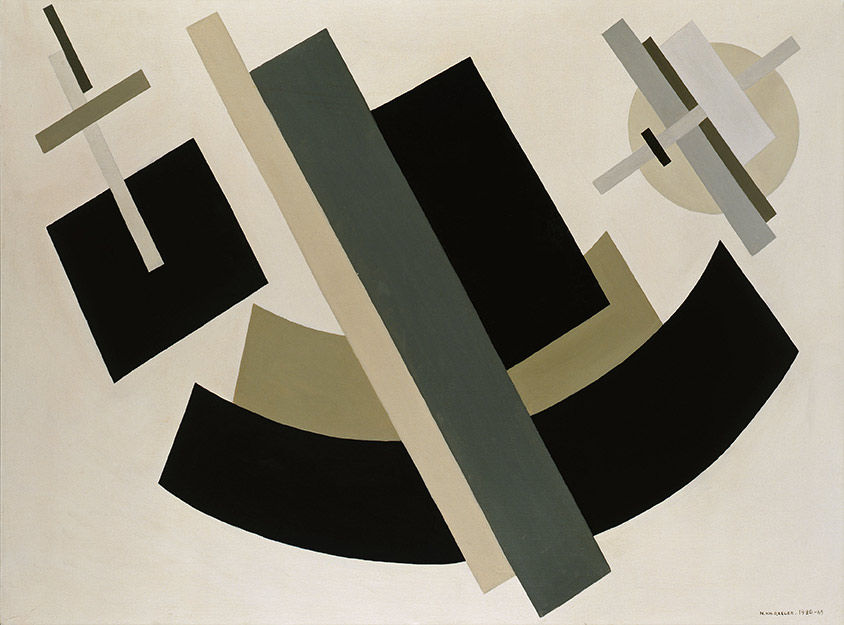 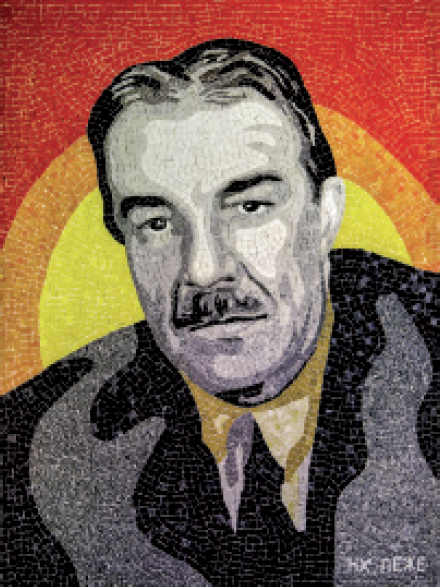 For all information: contact@comiteleger.fr
To submit a work to the Comité Léger,
please go to the page Expertise. 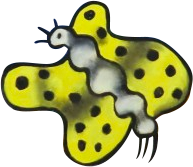